“A time capsule that was buried 50 years ago is being unearthed.”

I stared at my husband, my eyes wide, my arms gesticulating wildly at my computer monitor. The Facebook event read:

‘It’s Westland’s 50th Birthday. The City of Westland invites you to attend the Homecoming Celebration at City Hall … Opening Ceremony with a Time Capsule Opening is scheduled for 11 a.m. and Open House is from 11 a.m. until 6 p.m.’

Was I a resident of Westland? No. Did I care anyway? Absolutely. This was a time capsule! A goddamn time capsule. This meant so many things! First, this meant, as previously stated, that we lived in the future. Sure, it wasn’t the flying car/robot dog/teleportation future we’d be promised when we were small… But look at the bigger picture! We live in an era where time capsules are coming of age.

When I was a kid, I felt like we were putting a time capsule in the ground every other week. The grounds of the Pacific Northwest are littered with them. Like breweries in Michigan. Walk a block and a half, look down at your feet, see the hopes and dreams of the youth of tomorrow signified by a placard.

What you don’t see is the same youths agonizing over the time capsule. Here, we’ve buried these things for future generations… but then that’s it. No reveal. Just waiting. YEARS of waiting. It’s really, really anticlimactic when you’re seven.

But now one was capsule was being unearthed. The wait was over. The future was now.

As I pulled into the parking lot of Westland City Hall, Alice Cooper’s “Only My Heart Talkin’” (not a good song, in my opinion) popped on my stereo… Somewhat serendipitously, it turns out, as Alice Cooper is a celebrated former Westland resident. Go figure.

I found my way to the general assembly room that held the capsule. Unearthed some time earlier, it sat on a table flanked by white gloves and golden crowbars. I pondered where you picked up golden crowbars. Perhaps the same place you get large ribbon cutting scissors? Golden shovels and hard hats? Giant novelty checks? I would have to ask my questions later. Things were getting started.

Since this was also the town’s 50th anniversary, there was a certain amount of ceremony involved in the proceedings. The presenting of the colors, the thanking of sponsors and past administrations… There was also celebration. Dancing and music and stories. It was actually really nice. You could really get a feel for the community.

But also the feeling that everyone just wanted things to hurry up so we could get to the goddamn time capsule. 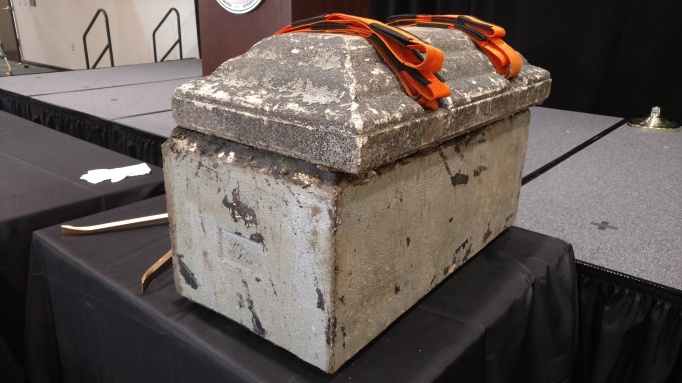 The golden crowbars and white gloves were donned for some photo ops. Soft chuckles from the crowd as they were set to side and replaced by a burly dude and a hammer.

Once the lid was lifted off the casket-like case (donated by a local mortuary, actually) we saw that the capsule itself was a large tube. It was cracked open in short order by the hammer. Two representatives of the local historical society, a husband and wife, were tasked with sifting through the contents (and to their credit were ALMOST as excited as I was.) As they began to pull out objects wrapped in black plastic, I felt myself inch to the front of my seat.

There was infinite possibility in those bags. I couldn’t google, nor ask anyone what was inside. For me these objects were a mystery that I couldn’t solve myself. How long has it been since I felt that way? Sometimes books and movies have twists, but this was going to be a true surprise. I had no idea what to expect.

Several other bags revealed their contents. Model cars (Chryslers and Fords, naturally), a Gumby toy (77 cents), a box of Kleenex (2 for 25 cents!), and a Bic pen. Some medical supplies and a Sears catalog. My favorite item was the can of Stroh’s beer that had been sealed away, though not well enough since it was leaking.

There were lots of pictures and paperwork. So much paperwork! Too much for them to review at the time.

And then we were done. 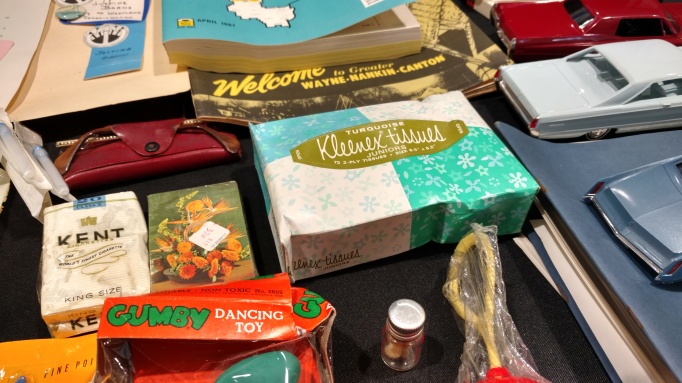 People started to get up to leave but I sat for a minute. I don’t know what I expected but I knew this wasn’t quite it. The contents were a disappointment to me. I had pens and I had Kleenex. Here, valuable space in this tube had been taken up by modern comforts. I guess I expected more dramatic items? A demo album by an early Alice Cooper, perhaps?

It was no disrespect to the original time capsule folks. How could they have known that aside from inflation, things were more or less the same? A time capsule represents what is important to your community and in Westland that’s changed very little.

As the days have passed, I’ve gotten to be more okay with this. Sure, it was not the time capsule experience Lauren, Age 7 imagined… But it signified what was important to them and spoke to some core, human truths.

Truth: Paperwork is the same. (Heck, for all I know, that paperwork had a note from the City Clerk circa 1967 saying, “Please fill this form out in triplicate for the 50 year utilities renewal and fill out a form 78-B to pay for the replacement of the capsule. Have a swell day!”)

Truth: Pretty much everyone can appreciate the value of a nice, local beer.

Truth: People are basically the same too. While technology and communication have evolved, we still like toys. We still have hometown pride. We still need to wipe our noses.

And that’s actually really comforting to me. Who knows, in 50 years I might have that flying, teleporting, robot dog. But I’ll probably still have a city hall where I can meet people and connect with my community and fill out forms in triplicate. Honestly, that would be just fine with me.