I’ve been reading Singled Out: How Two Million British Women Survived Without Men after the First World War. It’s filled with stories that came out of the tragic circumstances of WW1. Challenges I would have never imagined for those left behind when their men went off to die defending them. For a society predicated on the idea that a woman’s purpose was to be married and have children, this was a huge problem. There just weren’t enough men. The book is dense and well researched. I’m enjoying it.

I guess having a text that is so academic (and British, which cannot be divorced from an association with propriety) is why this phrase stuck out so much: “had had”

A reference to the past where you possessed something. I can only imagine how infuriating the English language can be to non-native speakers when they see things like this. Heck, to native speakers as well.

I remembered my first encounter with the phrase so vividly. I was in the elementary school library, probably reading ‘The Giver’ or some other classic, and noticed it in my book. I read and reread but it made no sense! I ran up to my librarian, proclaiming that I found a typo in a book. She explained that wasn’t the case and that having the word in the sentence twice, right after one another, made sense because the meaning of each instance was different. I walked away thoroughly perplexed.

And of course there’s situations where the word can show up even more often. Because of the way it can reference possession, the past, AND ITSELF, there is a way to use the word “had” eleven times in a row. Here’s a widely circulated academic example:

Confused? Of course, because I look like a damn crazy person right now. But it is correct. Not that this is academically kosher, but you can head to the Wikipedia page dedicated to the subject. It contains this lovely bit of text:

Now who looks crazy. THE ENGLISH LANGUAGE. That’s who. 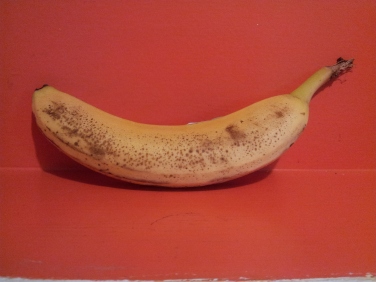 Here is our single banana. Without fail.

Today’s post is short because I haven’t been feeling well, truth be told. BUT DO YOU EVER HAVE LIKE ONE BANANA YOU DIDN’T GET TO? And you’re all, “Awww man.” and it’s all spotty and the texture is too soft to be manageable or palatable in anyway, like if you could trap weird sadness inside a sandwich baggie and leave it in the sun. I’m feeling gross just talking about it. But this happens to me ALL the time.

The hubs and I typically eat a banana a day. I have weird health things so they’re one of the only fruits I can eat anymore. A balanced breakfast is a. a banana b. a yogurt from Trader Joe’s c. fistful of supplements and c. a single cup of coffee. Then I’m on my way.

But our math is usually off by one banana. One banana too many to eat them all at optimal banana status or O.B.S. We’ve tried adjusting the amount we buy. We’ve changed where they’re stored. And yet one banana always escapes O.B.S. and heads straight to Ohio. (Meaning Ohio is crummy.) (Why am I picking on Ohio?) (I don’t know, I’m not feeling great.)

I have to imagine I am not the only soul with this issue. Surely there are others who have this issue who are not as blessed as one Alton Brown, always having three to four lame duck bananas available to make his banana bread (which is delicious and if you have a chance it makes for a nice, moist, banana bread). SO I SHARE WITH YOU…

Two ways to make do with that overripe banana (that avoid throwing it away).

One Banana Banana Bread – The Fauxmartha (a good blog name)

Pinterest revealed to me this one banana banana bread recipe (say that five times fast) and I loved it. I’m a great instruction follower when it comes to baking, but my attempts at just tweaking banana bread recipes by half or a third so the one banana would be proportionate to the bread? Misery. Either I succeeded in baking a rock or a never solidifying lump of goo. At least someone better equipped for these matters was able to make the dream happen. I was thinking about including a picture… but why? It’s banana bread, you know what it looks like. Tada. If you click the link and you will see a stumpy loaf (which I solved by baking in a smaller loaf pan).

Now these, THESE are great. Take banana bread. But make it slightly firmer and not as crumbly. And cookie shaped. Yes. Important to mention. That’s what these are! Now this recipe calls for a 1/4 cup banana mush, banana chips, as well as nuts. I had to neuter the recipe due to nut allergies (HEH) but I’ve never seen or heard about no kinda banana chips. So I used a whole banana and cinnamon chips. When in doubt, my friends, ADD CINNAMON CHIPS. We add them to a lot of our baked goods. There’s a storage can of them sitting on my counter so they can be available at a MOMENTS NOTICE. THAT’S HOW IMPORTANT THIS IS. No photos of these because they were all eaten.

But there you have it! I have solved yet another one of life’s little mysteries. Maybe next I’ll tackle why my back hurts when I sit and my limbs get tingly. STAY TUNED.